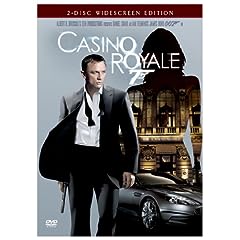 Casino Royale (19 03 07): I grew up with James Bond. My Dad loves the franchise. I’ve seen most of the Bond movies except Oh Her Majesty’s Secret Service so don’t ask me about Lazenby, but I believe each Bond is unique and different. I don’t pick favourites among them any more. Given that, I really liked this movie. I found the last couple of Bond movies pedantic compared to this. I have not read any of the Bond books or any spy novels; not for dislike, but lack of chance. Having said that, this movie seemed to be more like an actual spy novel with a plot rather than a screenplay someone put forth so the franchise could keep going. I really did like Pierce Brosnan’s Bond, but I found that Daniel Craig was raw in his portrayal. His emotional side was a tad more soft and revealing, which makes me more excited that he’s going to Asriel. Eva Green, the main Bond girl of this film, is simply beautiful and I really look forward to her in The Golden Compass as well.

Fruits Basket (21-22 03 07): Every episode is so emotional. I watched this in Japanese with French subtitles which got me brushing up on the latter. I remember how obsessed everyone was with the anime when it first came out in Japan. Due to the fact that it ran concurrent with the manga, and probably thought there would be a second season, a couple of the episodes were filler-ish. I think it would have made a good second season even though some of the endings to the manga were rather lame. Still, it ended on a beautiful note with the 26 eps.