Hello everyone! I hope you all are having a lovely holiday season.

I didn’t post last week because I really didn’t have anything to write about as I spent most of those last two weeks recovering from my sinusitis. But guess what? I got the flu!

The worse of it is over as the fever broke late Friday. I have been very lucky to not have contracted the flu since I was a toddler. I suspected it was the flu because I don’t remember having a fever that intense. There has been a big flu outbreak in my city, and since my immune system had already been recently compromised (welcome new virus!), I was susceptible. It is disappointing because I wanted to go out more this week. Also, for once, I had plans for New Year’s Eve (rare for me) which I had to cancel. Just my lucky to have a whole of 2012 relatively low on illnesses and all shoved into December.

In other news, I read some Bel-Ami on Christmas and will try to read some today when I am more alert. I really want to finish it before the New Year, but I am not sure I will given how slow I read in French.

I also cleaned up an old TV caddy which had VHS tapes (remember those?) so I could shove some of my less read books up there such as my Harry Potter series. My books are breeding at a fast rate. I ordered 4 new cookbooks and 1 knitting book on Boxing Day. This does not include the 2 actual cookbooks I intended to get myself for Christmas. After that, I will stop until next the holidays at least.

I also went Boxing Day shopping at Michaels. This is my third year in a row shopping there. I don’t really like shopping with big crowds, but a big box craft store isn’t as busy as a mall. Not only is the yarn on sale on this day, there is an additional 25% the whole sale including sale items. I stocked up on some Patons Classic Wool.

I also bought an OttLite Craft Lamp which appears to be a recently discontinued model: 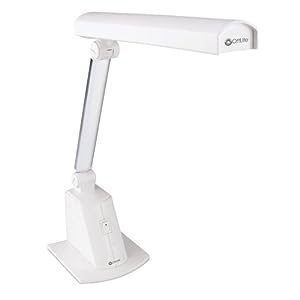 I’ve read about these lamps on Ravelry, and been doing some research on them. I have a big desk so I actually have two lamps: one regular fluorescent and one halogen. To save energy, I almost never use overhead/ceiling lights. I wanted to replace the fluorescent lamp because it is rather dim and yellow. Lately, I’ve found it tiring to read long periods under fluorescent light at night. The OttLite comes with good reviews: both for knitting and reading. They are also suppose to be very energy efficient.

So far, it’s been working well. I emailed OttLite with a question and they were prompt in replying even for the holidays. While I am not crazy about choosing a white lamp, I like that mine folds in itself so it looks less cluttered when not in use.

The Michaels I went too didn’t have a big selection. The item was on for 50% off that week though. It was between this craft lamp, a very heavy black table lamp, the Tulip (which obviously had been opened and/or returned), floor lamps, and a travel pink light. I think if I like the OttLite enough, I’ll wait until another sale to get a travel version as I can see it great for travel.

Do you have an OttLite or a specific reading/crafting light? Do you like it and which brand and model do you have?