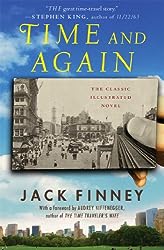 I started this 1970 time travel novel on the day of “Mad Men”’s 7B premiere. This book does excel in its details about 1882 New York City. It was an interesting historical novel to read about 1970 as written by a writer of that time. It had some interesting moments about how someone would think about it. There was even a line about “seeing Negroes… and I prevented myself from going over there to tell them I had liked Martin Luther King Jr.”

The plot and characters were alright. Neither aspect was exceptional. I thought the protagonist and most of the characters were decently drawn out. I understood their motivations. At times, I was a bit irked that for a man trained by a government time travel programme, he made a number of historical gaffes in the past. The plot prodded along. I did no find it very compelling and not much actually happened until the last quarter.

I found the actual time travel method used in the book to be a bit silly. Maybe it was the style at the time, but there was no technology or magic involved. It was never explained in detail. The author just wanted the character to go back to 1882 more than anything.

The ending was interesting. I will no spoil it, but there is a paradox involved. It is not annoying because I think for the purposes of character and plot development, I liked the ending. However, if you have read or watched even a couple of time travel books, shows, and movies, you’d realize the paradox.

Not a bad novel. I recommend it to New Yorkers since if I lived there I’d love to find time and explore the city as the characters did.