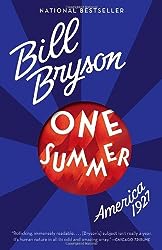 Certain sections and certain figures were interesting, but the design of the book was disjointed. It moved from one thing to another. I actually like when Bryson writes like this and it works in his memoirs and his previous nonfiction works, but the restrictive timeline of this book limited the topics.

I was really bored during certain sections and found it slow going. I only finished it because after a boring section, it would become mildly interesting again. After the half way point, I decided to just finish it. It was well researched. However, I really have to consider each new Bryson books more thoroughly from now on.