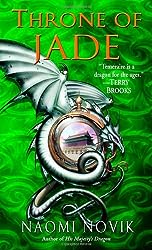 This series is distracting because I want to read it all in one go. I even stayed up past my bed time and lost sleep reading the ending.

As hinted by the end of the last book and this title, Termeraire and Laurence go to China in this novel. The first half of this book dragged for me as they spent all of on the long sea voyage. When they finally got to China, it was a lot more interesting to me. The world building and alternate history of China was well done and I though Novik even wore the Chinese politics almost as well as the many historic fiction Chinese dramas I’ve written. Fights for the throne were common and more so with dragons no doubt.

I really liked Termeraire interacting with the Chinese dragons and how he very much is a “young man” in this book when he was more of an impulsive yet keen child in the last book.

While I find Laurence a good character overall, I did have a few moments where I felt like rolling my eyes at him. He really can be very stuffy. He’s given to less formality than he was before, but there was not enough direct and straight forward characters in this book to complement him. It was also more of a male dominated novel than the first time; I yearned to read more about the female dragons and female companions.

Still good stuff and I went to bed thinking about having a dragon like Termeraire as my companion. I will however read other books because I’ll blitz through this series if I’m not careful.