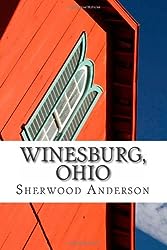 This is a collection of stories from the same town of characters. I had hoped it would be like Gaskell’s Cranford, but it was a bit more like Faulkner and Stoner by John Williams.

Faulkner and Hemingway were allegedly inspired by Anderson. He is definitely a good writer and there definite moments of powerful prose and characterizations.

“Like a thousand other strong men who have come into the world here in America in these later times, James was but half strong. He could master others but he could not master himself.”

Anderson really seems to be able to get into a lot of characters in a quick succession of time. However, I found most of the stories too glum for me to enjoy fully. It’s one of the reasons I have no tried to read Faulkner again.

I yearn to read more books that are slightly less depressing. The ending is hopeful though I did feel I spent 250 pages with highly repressed characters. That’s a bit much. I did like it for the most part, but I do not think I will search out Anderson anytime soon.