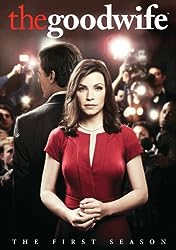 This post contains majors spoilers for The Good Wife.

This critically acclaimed show has been on my list the last couple years. One of the reasons I did end up binge watching it was because it is/was well regarded, this is the last season, and I’m unspoiled.

This was one of the few shows that I was very unspoiled about. This is difficult because I am not afraid of spoilers and know more about pop culture than the average person.

What I knew Going In: the general cast, some of the guest stars, the main character was a politician’s wife, and that it was a legal/political drama.

Usually, I start off with the Bad stuff, but in this show’s case, I want to emphasize how much I enjoyed and how bad it has now become.

Characters: I did not love Alicia, but I grew to like her a little bit especially her friendships with Kallinda and Cary. I love Cary, Kallinda, Diane, and most of the time, Eli. It’s not a surprise that my “ships” were the various friendships between these characters. I find Alicia was elevated as well. I liked her children and their arcs too. My favourite romantic ship was Cary/Kallinda even though I knew it was doomed, but I liked them both a lot. There are also a couple re-occurring guest characters I like: Elspeth and Capt. Hicks are two.

Plot: When I started watching the show, it was decent, but I do not love procedural. However, the show managed to balance season long arcs with their Case of the Weeks. I think I became truly addicted around Season Three and I really found it hard to move away from it until S5. There were enough twists and character growth to make me truly involved and addicted.

I really disliked season 6 and find season 7 painful to even watch.

Dropped Storylines and Characters: A number of story lines disappear over time or characters are dropped completely without a word e.g. Robyn, the various African American lawyers at the firms, Diane’s flirtation with Jack, and many others. Kallinda’s background was inconsistent too. Basically most things to do with Kallinda since Season 5 because of the alleged feud between her and the Julianna Marguiles. That was one of the best relationships on the show.

Repetitive and Drawn Out Storylines or Characters: Lots of things repeated or were dragged out including the Will/Alicia romance. I actually thought killing Will was a great way to put energy into the show. The firm has changed its name so many times I’ve lost count. Ridiculous. Many of the guest stars and characters should be used in small doses including the bad guys such as Lemond Bishop. His arc with Kallinda was convoluted and not a good last arc for a favourite character.

The Hair: It wasn’t good on this show and Alicia’s wigs have become worse over time.

Alicia: At times, I enjoyed Alicia’s arc, but things became ruined for me when she ran for State Attorney’s office in S6 wherein all her storylines were removed from the law firms’ characters. The fact that her business partner and friend Cary was in trouble did not seem to matter at all to her. She complained how Cary would make decisions, but Diane is a far better law partner to Cary than Alicia ever was. She only ever does things for herself and I do not buy her being a good person. I don’t care about her going back and forth on the men she sleeps with because she does not love her husband and mourns for Will. I now dislike Alicia especially in light of her new romance with Jeffrey Dean Morgan’s Jason.

The first five seasons of the show were enjoyable for me to watch, but the last one and the current one have been painfully boring and a shell of it’s former self. I hope Alicia gets disbarred. She and Peter deserve each other honestly.

I’d like a spin-off with my favourite characters without Alicia, but I’ll follow certain of the actor’s elsewhere.