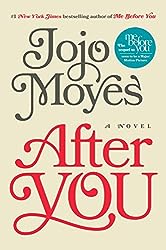 I did not enjoy this book. In fact, I wish there was not a sequel. I’m aware the fans wanted a sequel, but I think in this case, she should have just let the story end there. I felt the ending of the last one was bittersweet and hopeful. The opening of this novel ruined that right away.

I had criticized the previous novel’s prosaic dialogue and prose, but it was not as bad as this. This novel felt like mediocre fanfiction of the first one. The characters did not feel particularly real. It was depressing and contrived. At times, it felt like an After School special. The first book was dramatic and even a bit melodramatic, but this novel was a soap opera.

It introduces a new pivotal character to the lives of the characters and she is horrible. Lily is an annoying, two dimensional teenage brat raised from an even horrible mother. Her mother is such an awful parent that the character became a caricature.

I also became frustrated with Louisa again as it felt like she had regressed. Even more annoying, Louisa gets more chances in this book than anyone else that is humanely possible. She’s a damn lucky character and if I did not like her, I would have hated this book even more.

Worse with these new characters and events, I felt manipulated as a reader. Characters make speeches and monologues in this maudlin way that felt disingenuous. Bad things happen to the characters to move the plot forward, but it all felt forced and far fetched.

I kept reading hoping it would get better, but I became indifferent and wanted it to be over. Thankfully, it was easy to read too.

As someone who gave the last book only 3/5 stars, this sequel did not work for me either. Some ardent fans felt the same, but there are others who love Louisa Clark so much that they want more from her. You may get that here.

I do think this novel is a cautionary tale about sequels. I am going to watch the movie and forget this novel happens after it.