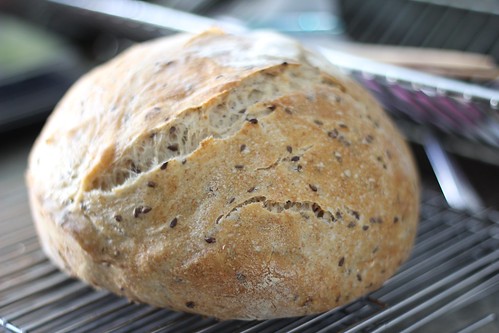 With this entry, I have gone off the one sourdough recipe I have been making and found others. Basically, I am doing the turn and fold method with the long bulk fermentation for all my breads now. It is mostly working too and I love eating my sourdough. I bake it about once a week now, often prepping the dough in the morning and evening for first and second proof, then baking at night. I do not cut the bread until the next morning.

I was going to come home around 10 or 11pm. However, I got in at 1AM and put into fridge because I wanted to salvage it. In the morning, I took it out at 10:30 am for second fermentation. When I turned on the oven 4 hours later, it looked like a sad loaf. It did not re-achieve it’s oven spring from the bulk fermentation. It was smaller than it had been. It didn’t look good. The loaf was edible, but it was more dense and the sour flavour was not as good as it was before. I knew I took a risk with the fridge. I won’t do that again.

Next time: Same WW/AP flour ratios. More water probably closer to 250g in the original recipe because of the WW. 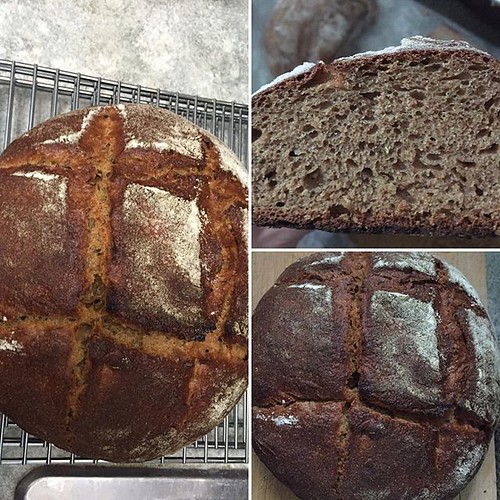 Recipe from Breadtopia. In the morning, I used the following ingredients:

I did not have anise seed or an orange. I started off with 300g water, but I put in a tiny amount when I mixed it. It was difficult to mix. As in the recipe, I used Danish dough whisk throughout for the stretch and folds at 15 mins, 15 mins, and added a final one after 30 mins more. Then I let rise one of the warmest rooms in my apt: the bathroom.

Started shaping after about 11 hours (dough almost tripled). Then proofed for about an hour in same bowl with floured cloth. It could have probably been proofed longer, but it was getting late. I baked in hot dutch oven with wheat bran cover at around 460F for 30 mins, then lid off for another 10 mins. It hit 211F by that time though. The dough spread in the dutch oven which made it wide, but it still got a decent oven spring. It even got an “ear” from the scoring. The smell is distinct from other breads.

The taste was great and the crumb was moist, but not overcooked at all. It was not sour. I gave it to a few people to try and they all loved it.

Next Time: Maybe 275g-300g water. Less fennel seed too. Orange if I have it. Longer fermentation and full second proof. Reduce baking time and temperature say 450Fish for 25 minutes, 10 minutes lid off. Maybe use a loaf pan. 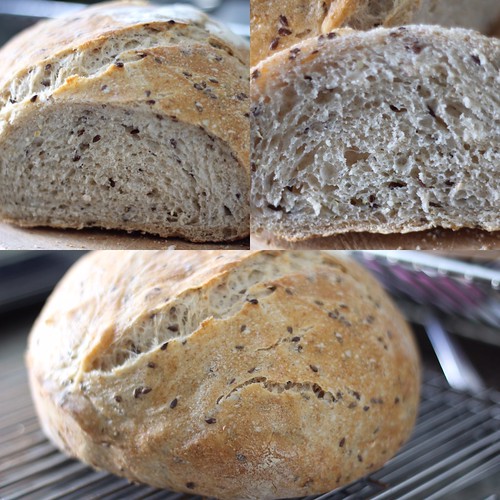 Recipe adapted from Flax Seed and Oatmeal Sourdough which uses a levain and a soaker of flax and oatmeal.

I made the soaker of:

In the morning at around 9AM, I added the this water and flour:

Autolysed for 30 mins then added 1/2 tsp salt and the soaker. I did the recommended six turn and folds with my Danish dough hook through the day. At around 6:30pm, I shaped for a final proof. I was going to return home after two hours, but I came home after three hours. The dough was definitely ready and so I preheated to 460F with my dutch oven inside. Wheat bran in and turned down to 450F. 25 mins covered, 12 mins uncovered. Beautiful. I forgot to slash the bread, but it made it’s own perfect openings.

As I did so many turn and folds, I could have made this dough earlier. All of the above times could have been cut, but it works for my schedule. I am finding that a long second proof is the way to go for a lot sourdough. I did not find it that worthwhile in the Jim Lahey No Knead commercial yeast bread. The proofed sourdough is not sticky and holds up better when baked. I still think that keeping water minimal works for myself and my starter; I can’t do high hydration loaves.

Taste & Crumb: It was not as sour as I would have thought; it had such a long feed and proof too. It could have done with a pinch of more salt. The crumb was also not as big as I thought, but I think it was the hydration level. Good crust; not too hard and I kept it from being too brown.

Next time: Up the WW. Keep the water the same. A pinch more salt. Remember to slash even though it was not essential. I think I’ll do 30 mins covered and 12 mins uncovered at 450F next time. Use a different soaker perhaps too but I really liked this one.