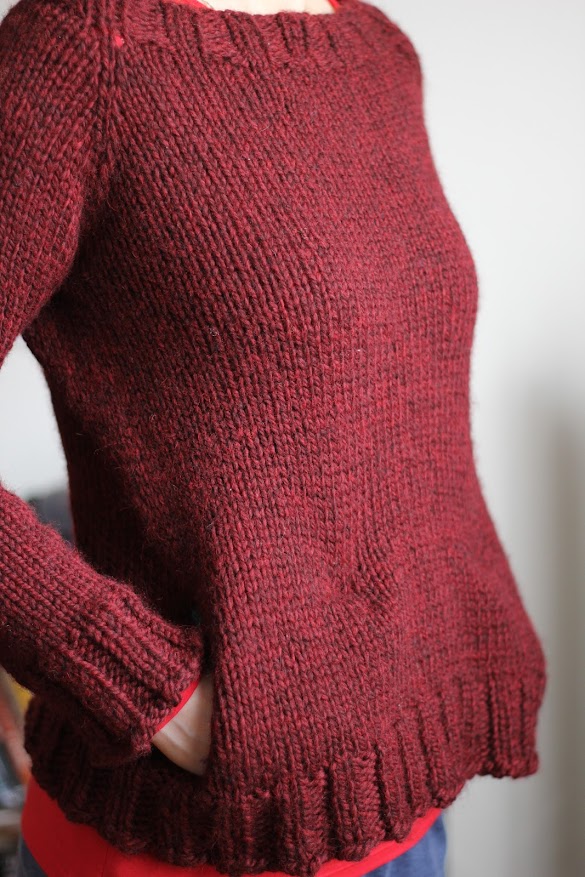 Originally, I had bought this yarn for Sylvi, a big cabled coat. I started it, but it was on hold for years. In the end, I decided to frog it and use the yarn for other things. I usually think of sweaters first when I have an abundance of yarn.

I wanted a cozy, easy house sweater. This is an easy and straight forward pattern. It’s a top-down raglan with pockets. I even made it one size larger so it can have positive ease so I can easily throw it over anything in the cold months.

END_OF_DOCUMENT_TOKEN_TO_BE_REPLACED

This past week, I decided to frog one of my handknit cardigans. This is not really an actual WIP, but frogging nearly 1000 yards of sport alpaca yarn is a job of a kind. I was never really happy with out Paris turned out. I knit a lot items and it’s true that I do not wear some of them at all. I just couldn’t even see myself wearing this cardigan. I also wanted to salvage the yarn which is Susan Andrew Collection Inca Gold Baby Alpaca.

This was my first time completely ripping apart a sweater. I’m already finished ripping it out and putting them into balls. That took quite a number of days, but I had patience and the time for it. I was sick for most of it so I had not much else to do.

Things I learned: with knitting in the round, it’s easier to start from the bind off end. With knitting flat, start at the cast on edge. I learned this the hard way which is why I have so many left over balls. It was inevitable though with my shortrow sleeves that it was never going to be a simple frogging process.

Do you see the edge of a ball in the top right hand corner. This is the sixth ball that I didn’t use in the cardigan by accident. After I ripped the cardigan, I only had 240g. That’s when I realized I never used the sixth skein which was hiding in my yarn box. No wonder I ran out of yarn, but I wouldn’t knit Paris again.

The next step will be winding the balls on the Niddy Noddy. Thank goodness I made one of those; it is finally proving useful these days. After I tie it up, I will wash, tie, and hang the yarn to dry. I will skein them until I am ready to reball them and use them for a future project.

Plans for yarn afterwards: another cardigan or pullover. The main contender is Buttercup by Heidi Kirrmaier which I will likely lengthen sleeves. But it’s time I do something with positive ease. This is alpaca after all.

Has anyone else been frogging projects? I finished one sleeve yesterday. While I was doing the body, I didn’t want the sleeves to take up my remaining yarn so I put the body on hold (it’s beyond the waist shaping now) and started the sleeves. That way, I can make this a fairly long cardigan. I am really liking this royal blue from Patons Classic Wool.

Let’s be honest, I’d have finished this sweater in less than two weeks given my situation. I’ve been very slow with it and spent a few days not even knitting a bit. I know knitting hasn’t been on my radar as much lately because of that and the fact I haven’t been on Ravelry much. I was a bit sick the other week and distracted with other things. I also haven’t been watching shows or movies that much and I almost always knit during those times. I don’t really sit and knit; I’m usually watching something while doing it. Even with lace!

In any case, the Crazy Zauberball I mentioned a few weeks ago, I bought as a birthday present to myself. Yay! Except I have no idea what I will do with it yet.

I’m nearly done this cardigan and due to my lack of knitting mojo, I haven’t really been excited for my next project. Maybe I will take a break and knit some hexipuffs. I haven’t done that since last year; I can make a couple and then plan my next project.

Do you ever feel you lose momentum during projects and why?

Check out other WIPW at Tami’s Amis.

I have resolved to blog more about knitting so I will be doing Tami’s WIP Wednesday and Finished Object Friday when I can. Lately, I haven’t been knitting too much and to be honest, the last project I did, I hated. Rarely do I hate the end result as much as I did this Andrea’s Shawl I was working on. It wasn’t the pattern’s fault really, mostly it was one of the yarns. Anyway, I have something else on my needles now.

The Garter Yoke Cardigan from Knit.1 Fall/Winter 2008. I wanted to make this for a long time. I can’t even remember why. I finally got a copy of the pattern. Here’s my tiny amount of progress:

I started this project last week, and I usually knit faster than this, but I’ve been doing other things lately so I haven’t been knitting as much.

I am using Patons Classic Wool. I got it on sale at Michaels the other week. I noticed that Patons changed their yardage so now you get twenty less yards per skein. Three of the skeins I got still have the old yardage, but this change is Patons way of adjusting for higher wool prices. I don’t dislike Patons, but to be honest, I do feel I should just save up and buy better wool. When it goes on sale, it is very cheap and affordable, but now with the shortened yardage, I will probably not buy this yarn for pullovers anymore.

I have been struggling not to buy yarn these days as there has been a Crazy Zauberball calling my name. I shouldn’t since my yarn stash is overflowing. I can’t live beyond my yarn means especially given my tenuous situation. Is the yarn calling and you must say no?

Since I am a knitting monogamist, that’s it for me this week. The weather is warmer so I am less sitting around knitting and more cleaning and exploring.

Have a good rest of the week.

I love Kauni Effetkgarn. In 2010, I bought three balls of the EQ colour in Switzerland. I used up two that summer, but I had one left to save for the future.

In February, I finally used the third skein in two projects. First, I wanted to make a sweater with the yarn. I picked Margot and decided to stripe it and make it short sleeved. My Margot on Ravelry Both projects have been striped with Briggs & Little Sport in natural/undyed which is the right weight and has the same rustic appeal as the Kauni wool. Also, the B&L was inexpensive. I used 1.5 balls of the B&L for both projects. This is the last of the Kauni I have and since it isn’t sold locally, I am not sure when I will buy it again. If I do, I’ll probably stock up. I get a huge kick out of knitting with this yarn and it is easily one of my favourite yarns.