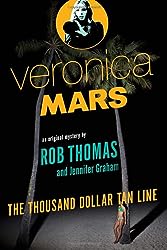 I review this book as a fan of the show and movie. To read and appreciate this book, you must have watched some of the “Veronica Mars” show and definitely the recent movie. I was never a huge fan of the show in the sense I was not vocal about it, but I loved the first season. I grew to adore some of the characters. When the Kickstarter for the movie was announced, I became excited. In summary, I was satisfied with the movie. It was not perfect, but it made me excited like when I had first watched the first season.

This novel takes place two months after the movie and it continues Veronica Mars’s return to Neptune. Veronica spends a lot of the novel with her best friends Mac and Wallace, her father Keith and a couple of returning characters. The novel felt true to the spirit to the characters and reminded me of an episode of the show.

The book is darker though. There are more F words, scary scenes, and suspense. I liked it though. It’s not the best written book ever, but it has my favourite characters and it was entertaining and a quick read. There was not enough Logan, but I did not mind. I think the new difficulty in the relationship is much more realistic and enjoyable for me than to watch their trust issues play out ad-nauseaum like it did in the final season of the show.

The audiobook is narrated by Kristen Bell and she does a pretty good impression of her best friends too. It’s fun hearing the book read by the lead actress of the show.

Recommended to all my fellow marshmallows.