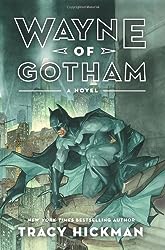 This was just OK. It was by no means badly written, bad, or even that boring. I just did not find myself finding anything special about the work.

This was my first time reading a Batman novel that was not a graphic novel. I found that towards the ending the writing style did remind me of a comic. I found the dialogue in the 1950s scene a bit too campy and on-the-nose. I did not feel particularly attached to any of the characters, and just enough for Bruce/Batman and Thomas.

What kept me reading was the mystery did keep building and I liked the inclusion of Thomas Wayne’s story. I found the femela characters lacking, particularly Martha who seemed to be a rich girl stereotype and dream girl more than an actual person in her scenes.

I found the plot and ending typical of how the Batman mythos has evolved in film. I would not particularly recommend this to anyone, but it was an alright novel that some Batman fans may enjoy.