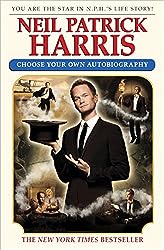 A funny and light autobiography. I actually read this book straight through rather than choose any choices as I wanted to make sure I didn’t miss anything. While not completely linear, going by the actual page numbers was fine. NPH and the book publisher made it relatively cohesive if you read it straight through.

I laughed a couple of times which is all one can really ask for from a biographic work of an actor known for comedy.

Content wise, I was amused by the celebrity gossip and most of the stuff did not shock me. I like NPH, but I didn’t really start to know him until “How I Met Your Mother”. I enjoyed that show in its early years (not so much later). Harris’s insight on the show tickled me because he addresses how he himself loved the Robin character and engineered it so that Barney and Robin would get together. I was a Barney/Robin shipper because I saw the attempts at chemistry. I’m glad it was intentional.

All in all, a night and frothy cocktail of a memoirs.