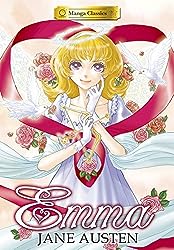 This manga took me a bit too long to read because I find it hard to watch Emma be so very wrong in visual form. There is a lot second hand embarrassment knowing how blind Emma is through most of this book with respect to the characters. It is understandable given her background, but it’s still hard to read through in comic form.

It is a fun manga adaptation as with the Pride and Prejudice one. If you enjoy both Austen and manga, then this a nice way to pass the time.

I would like to still say that the best Emma adaptation is BBC’s 2009 version.