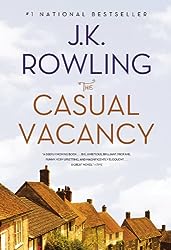 The reception to this book was mixed and not that positive to be honest. I tried going into it unbiased. There are a lot of things about this book that I didn’t like, but strangely, I think it grew on me a little bit by the end.

There were too many characters and I didn’t really feel sympathetic for most of them. It took about a hundred pages before I could tell the characters apart. They all sort of blurred together for me. It took until half way through the book (around 250 pages) that I started feeling a twinge of pathos about one of them.

I enjoy Rowling as a writer. I think she does have weaknesses as a writer exhibited in the Harry Potter books too. She has decent characterization skills, but it wasn’t shown in this novel. Somehow though, I became less indifferent towards the end of the novel. It veered towards being a bit cliche though, but I think she hit some emotional notes correctly.

On the way, I do not regret reading this novel and it was not as bad for me as some readers. I don’t recommend it though. If this was not JKR, I probably wouldn’t be eager to read another novel.