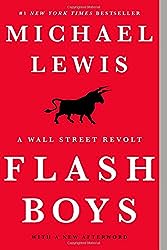 I first heard about this book when Lewis was interviewed on “The Daily Show.” I was intrigued right away because the story centers around a Canadian trader and banker. This book was a bestseller in Canada as well. The concept of the book interested me, and even more so when I heard that it might have been optioned for a movie. In the Sony email leaks scandal, it was revealed that Aaron Sorkin dismissed the idea of writing the script even though he’d been already paid for it. One of the reasons was that there weren’t many leading Asian actors. I was not a huge fan of Sorkin’s work before, but knowing that about him really irked me.

I think this book would make a nice movie. Better than The Social Network or the upcoming Jobs movie any way. I feel this is a serious topic of exploring the American and global financial markets. Furthermore, Lewis has written about a literal cast of characters.

Over the last few years, I have read more non-fiction than ever. I have been exposed to many journalist-authors such as Malcolm Gladwell, Michael Pollan, and now Lewis. Most of these non-fiction writers capture audience by bringing in standard fictional narratives emphasizing real people. I feel Lewis is one of the best I’ve read in awhile in terms of using that technique. He also explains things using “You.”

As I get older, I have been reading more non-fiction and I’ve began to deconstructing the style and prose. I found a lot of this story had an element of Joseph Campbell’s Hero Journey with Brad and his colleagues being the heroes. Another technique is the very faint personality of Lewis that comes through. Just a tiny little bit (more than Gladwell, but less than Pollan).

All that is to say, I really enjoyed this book. It really was like reading a novel. I will preface it to say that I have taken Economics courses and even went to a school with a strong Econ background (though I never Majored in it). I was never great at Econ or Finance, but I probably have more than the average layman’s understanding and interest in the global markets. Some of the technical stuff would not be interesting to most readers; however, I think the background and personality of the people involved can draw people in. I became interested in these people who became like characters in a novel.

I would not necessarily reread this work, but I enjoyed myself and learned a number of things about High Frequency Trading so it delivered on that. I guess the movie will never be made. Oh well. For more on this adaptation that won’t happen, this blog post on Fiction Diversity covers my feelings.