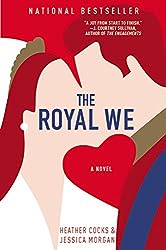 One reviewer on GoodReads called this Kate Middleton fanfiction.

It really is and I don’t even like Kate Middleton. I picked this up from the library Express/popular reads. I have not done that in a long time. I’ve been very behind on my reading this year and have too many books already. I picked up this book for two reasons. First, it was chicklit and I haven’t read that in a long time. I thought it would help me back on the reading horse. Secondly, the authors are the Fug Girls. That cinched it.

I have a lot of fanfiction in the past, but this kind of author self-insertion fanfiction is not something I’ve been keen on. While all the names have been changed, it was still very easy to picture all the real life characters. I think there were a good amount of characters and dialogue for this kind of novel. Prince Nick was a tad too generic romantic hero at times. Then again, that was in line with who he was based on.

This novel was addictive at times. It had enough drama, character moments, and plot twists to keep me reading. I liked the moments between Bex the protagonist and her sister. I found the whole love triangle bit realistic in a complicated way. The ending was a bit rushed though. As a former London dweller, I adored the references to various streets and buildings. However, it also didn’t feel like the authors had actually lived there. Still not a bad research for a chick lit novel.

All in all, a nice quick read. I enjoyed it. For the record, I am a Freddie girl. 🙂