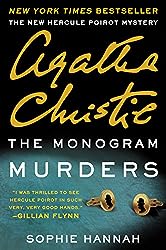 This novel was okay. I did not hate it, but I did not think it was a credit to Agatha Chistie or a particularly great mystery.

Poirot is not quite Poirot. The character felt a bit forced, but I could overlook that. I had more issues with Detective Catchpool who is insecure, inept and I suspect, deeply repressed in some way. I found the character a very poor narrator and simply annoying. He never spoke up. He never wanted to trust in Poirot even though Poirot is well respected and well known. He seemed surprised Poirot was right. I do not how the author could make such a bad detective character. Christie’s novels have good police detectives who are great friends with Poirot and don’t display Catchpool’s incessant anxiety about his work and value. The ending suggested that the author would like to write more about the bumbling Catchpool which I will not partake in reading.

The mystery was alright until it became ridiculously convoluted. At the ending and resolution, I was trying to figure out why there so many random puzzle pieces. It made me miss Christie’s cleaner denouements and closing acts wherein all the facts were laid bare, but without all the extraneous details. Clever, but not cumbersome or padded.

The lesson here is that I need to read much more of Christie before I consider reading another of these adapted works.