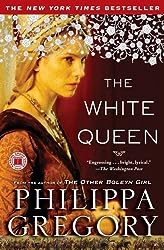 With this book, I am done with Gregory. I owned this book and the two others I previously reviewed. I tried The Queen’s Fool briefly but I decided to dump it a couple weeks ago.

All in all, I do not think Gregor is a terrible writer and I think this novel is better than The Boleyn Inheritance and it has elements which makes it almost as entertaining as The Other Boleyn Girl.

Elizabeth Woodville is an interesting historical person and as a fictional character, Gregory was able to make her interesting for a little while. She was a woman who loved her husband King and had enough ambition to enrich her life and those of her loved ones.

I did find the book tiring because of how much political unrest there was in the book. People kept turning their loyalties every chapter. I felt sorry for Elizabeth and her children especially knowing the tragic ending of her two sons, the Princes in the Tower.

This book also had sympathetic male characters like her brother Anthony, her older sons, and King Edward himself was not always so bad as Gregory paints the Tudors.

The ending of the book annoyed me as Gregory made Elizabeth of York (The White Princess) act like an ingrate to her own mother for keeping them all alive in sanctuary and secondly, for falling in love with her uncle Richard. That is not only incestuous and creepy, but Gregory seems to make it happen without any evidence or credit to Elizabeth. It makes Elizabeth a real idiot. Richard stole her own brother’s throne, declared her father a bastard (and as a result, herself and her siblings), kidnapped and imprisoned her brothers, and possibly had them murdered. Gregory hypothesizes that Richard did not murder the two Princes in the Tower and points the finger at the Tudors. That is a good hypothesis, but it makes no sense why Princess Elizabeth would still trust her uncle let alone fall in love with him. She could have ended the novel with Elizabeth reluctantly being a pawn in the game, but for her to be willing is very creepy and makes the character stupid beyond belief.

Even remembering this detail has made me want to downgrade the book and not read more of Gregory books. I am fine with fictionalizing of characters and embellishments or changes to history for fiction; however, I can’t justify character motivations being changed unreasonably and without much reason to plot either.