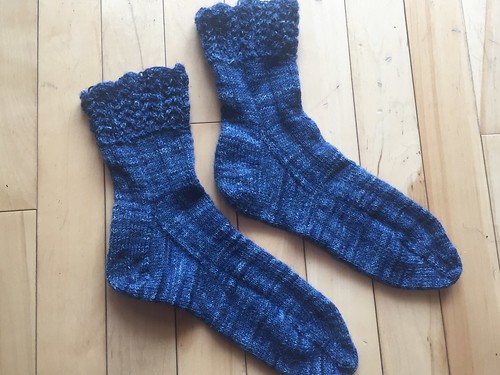 My second finished project of the year! This was suppose to be my 2018 Winter Olympics knitting project but I don’t think I can knit a pair of socks in two weeks like I use to back in 2010. It was a stretch, but I have learned my lesson. It’ll be easy scarves or hats for next Olympics challenge.

Since I bought two skeins of this yarn for P’s socks, I had more than enough leftover for a pair for me. I wanted a fairly easy pattern for the challenge and I prefer ribbed or plain knit socks now since I use my wool socks when I run outdoors. This pattern has been in my queue awhile and I think I almost made it earlier. However, I was not satisfied with the way it was written. The heel turn was unclear which would make it confusing for a beginner or novice. I was able to wrap and turn as I normally would, but it’s not a good heel. Secondly, the toe was not good for magic looping so I changed that as well. The stitch count after the heel also meant I had to shift the stitches too. Something I never like with magic loop, but that’s more on me than the pattern.

Cost of Project: Each skein was about $12CAD.
Would I knit it again? No.