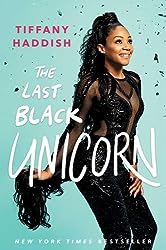 Recently, I was able to watch some of Tiffany Haddish’s talk show interviews. She was funny, engaging, and has some of the most charisma I’ve seen in an entertainer.

She promoted this book so I was able to retell some of the stories. Originally, I had intended to read the ebook and listen to the audiobook afterwards or at least least listen to some of the audiobook. However, the book is small and engaging enough that I listened to the whole audiobook while doing chores and sowing seeds on Good Friday.

Haddish had a rough upbringing. She spent time in the foster care system, her mother was abusive, and she struggled to become a comedian. As an adult, she had a series of bad relationships including an abusive ex-husband. A lot of the stories in the book are very sad and heart breaking as a result, but since Haddish usually spins it into a funny or honest way, it’s not always depressing.

I really empathized with at various points in the book. She described when she realized that her boyfriend had been cheating on her. I had suffered a deep betrayal once and her feelings then resonated with how I had felt too.

There are a couple of stories in this book that have received criticism on the language Haddish uses. There is a story which many will find rife with ableism, but I don’t ever feel Haddish is malicious. I feel the book weakens towards the last quarter as it becomes snippets of Hollywood encounters. It’s not really describing in detail her experiences more little anecdotes here and there with famous people. It becomes more disjointed towards the end.

While the audiobook was really narrated by Haddish, it does not have the same amount of energy as her TV appearances. I do wonder how it would have been to read it as well.

I am glad to have listened to this book because Haddish has been able to become empowered and overcome a lot of her past and upbringing.