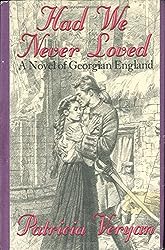 I had recommended to read Veryan’s novels after I asked for authors similar to Georgette Heyer. I was starting to miss reading her fluffy romances and did not like her mysteries.

This novel is the second in a series so I was a bit confused with the first chapter, but caught on. I also understand that there are other Very books which may be better.

There were a few times when reading that I wanted to dump this book, but I’ve already dumped a couple of other books this year. This is the year for me to dump books.

All in all, I was bored. I didn’t really enjoy the main romance. The leads were fine, but I did not feel connected to either of them. It also read like a bad romantic comedy at times with them being from such vast differences.

I was also at times more interested in side characters like Katrina Falcon. I found that this novel had too many male characters and male perspectives and not enough female ones. I do not think any two females a sustained conversation in this whole book. Something I enjoyed about Heyer was the relationships she had between characters of all genders especially the platonic ones.

I did not find main conflict compelling because the whole revenge plot was on the silly side. A bunch of men devise to entrap a family using a jewelled pin as the cause.

I will try Very one more time or even another, but this was a pass for me.