Labyrinth (11-12 12 12) – Wow, I loved this movie. I missed out on this classic growing up. Apparently it did poorly at the box office and with some critics. In any case, I’m sad that Jim Henson was disappointed that this tanked. I like Henson’s works on the Muppets, but this is in a different league. It’s slightlt dark, fun, and classic tale of growing up and friendship. Also, DAVID BOWIE! He wears really tight pants in this that should make this film PG-13. He is one of the only men I can think of who looks good with that much makeup. I prefer Bowie with short hair, but his wardrobe was rocking it. I really wouldn’t want to show this to any young girl because there seems to be a lot of sexual and romantic tension between a 15 year old girl and a Goblin King who looks twice her age (and probably way more since this is fairy tale). I often find myself being tempted by the villain and in this, I did want to spend forever with the Goblin King. Too bad the baby was in the way. I’ve seen Jennifer Connelly in only a couple of movies, but she was pitch perfect here. She demonstrated that growth of a young girl to a young woman seamlessly. One thing I like about 80s films is there are a lot of great teen actors and teen stories. Also, the special effects in this were excellent and it reminded me of a time when effects weren’t just on the computer. The puppets really helped make this very real. I could write more, but it’s almost a perfect movie for me in many ways. 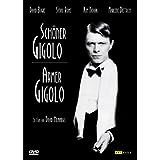 Just a Gigolo (16 12 12) – The things I do for David Bowie. Apparently, this movie was panned and even everyone associated with it is embarrassed. It is not a good movie. David Hemmings said that he wanted an ironic and tongue in cheek take on interwar Berlin. It is actually both these things, but in the package of a very slowly paced and badly written story. It does have its funny moments. The mauseoleum scene had me laughing out loud. The problem is that it wasn’t funny enough and the movie felt emotionally disjointed. The protagonist Paul is the opposite of Davie Bowie: repressed, awkward, and frigid. His acting isn’t that bad in it, and if you’re a true Bowie fan, you can at least appreciate he looks very good in this film. The film itself had good historical details, but I’m grasping here. Marlene Dietrich’s last two scenes weren’t all that either and the ending was depressing. I don’t recommend this unless you really want to see David Bowie looking good in 1920’s clothing.

From Up on Poppy Hill (27 12 2012) – While this is not one of the best of the Ghibli films, it is a lovely film. The animation is wonderful as always and so is the music. The story did make me cry or that could have been because I was sick and thus, moody. The plot is weirdly melodramatic, but it is touching in terms of friendship and also as a picture of Japan in the 1960s. Definitely a must for any Ghibli fan.

Sabrina (11 12 12) – Gosh, I love Audrey Hepburn. Her smile is amazing. No one in movies has a smile like hers anymore. She is radiant in black and white filmography too. This isn’t one of her best movies and in general, this movie isn’t even that good. Still, this is early Audrey and thus, very charming resplendent in a lovely Givenchy wardrobe. Billy Wilder always makes things at least somewhat fun. He’s one of my favourite directors. The ending is romantic too.

Funny Face (11 12 12) – I was sick so I had a Audrey Hepburn marathon. I noticed that in both Sabrina and Funny Face, she gets kissed very early on. I forgot they use to do that a lot in older films where the kissing comes early on and the final scene is usually good old fashioned embrace. Audrey is adorable in this film and allegedly, this bookish character is one of the closest to the real Audrey. Even the transformation of the character from nerd to supermodel showcases how her beauty goes from cute charm to classic elegance. As a musical, it’s mediocre since the songs aren’t very memorable. I’m not a big musical person in the sense I obsess over them, and I do like them. I just don’t memorize the songs or rewatch them a lot. The memorability is that this movie was shot on location in Paris and other visuals. I adore Fred Astaire. He is my favourite dancer so this pairing of him and Audrey worked for me. When I watch Audrey movies, I’m often envious of her wardrobe. In this movie, I was envious of the wardrobe and the fact she got to dance with Astaire. He is quite funny in this too. I love the movie pokes fun both at the fashion industry and counter-culture. Definitely one of my favourite Hepburn films along with Roman Holiday, Charade, A Nun’s Story, and Two for the Road.