A review of Game of Thrones by George R. R. Martin and the first season (2011) of the HBO show.

The first novel of Martin’s acclaimed A Song of Fire & Ice series. I’ve had my copy of this thick paperack on loan from a friend for a year. Part of the reason I read it was that I wanted to return it to more than anything. Of course, I did want to watch the HBO series.

While I read a lot of fantasy, I don’t generally read a lot of high fantasy. The Lord of the Rings was the last series I read, and I was not in love with it. When I was a child, I had a big fantasy and mythology phase so I became knowledgable about a lot of cultural myths. The series I remember from that experience is Lloyd Alexander’s Pydrain series which I liked quite a bit. I do read and enjoy a lot of fantasy, but they seem to be of the urban fantasy kind (like steampunk, vampires, etc.) or they relate to alternate universe theory or incorporate people from our own world such as the Narnia series and Harry Potter.

This was a bit different for me. A former work colleague had told me about this book series when the TV series was about to premiere two years ago. He was into on high fantasy and loved this series. He did say there were a lot of characters and a lot of deaths. Even knowing of the casting, I prepared myself not to be too overly attached to the characters since I anticipated them dieing.

Actually, it was less deaths than I expected (of the main characters any way), but there were a lot of characters. Perhaps a bit too many characters as I hard time remembering all the various houses. Of course, the book only really concentrates on the perspectives of eight characters, four females and four males. Unsurprisingly, two of my favourite characters are the girls. I actually became invested in their stories.

The book moves at a decent rate and brings the reader in through its actions and intrigue. It is still very long, and to be honest, I was a bit impatient with it in the middle. I wished things were going faster.

I’ve noticed that while I can enjoy intrigue, history, political conflicts and other conflicts, I find war and battle strategy generally boring in most books. I really glazed over the war parts in War & Peace. This book is more honest and real about war which was discomforting. The other uncomfortable thing about the book is the incest in early on. Another friend of mine could not be bothered to finish with the book and series because of that aspect. It doesn’t feature prominently, but does give a reader to pause.

Towards the end, I knew that I would not be satisfied with the ending in the sense that it would tie up loose ends. It did end on a suspenseful and exciting note, but I’m left thinking about the other characters and plot points. This book does feel like an introduction and it seems there will be much more action in the next books. 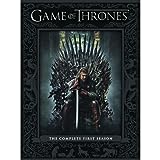 After the book, I was mixed about looking forward to the series. A lot of the stuff from the book is violent and sexual. This is an HBO series so they would definitely feature those aspects. Often times, it is excessive especially the nudity which I often feel is for shock value rather than for storytelling. On the other hand, I really wanted to see how they interpreted the setting, characters, and that great ending.

Great opening title sequence with the animation and the music. It also serves to educate the audience about the locations and settings.

This was a quite faithful adaptation. In many of the earlier episodes, they did not really alter scenes very much and most were taken straight from the book. They added more unseen scenes to explore other characters and storylines though as the season progressed. Martin is listed as an Executive Producer and was very involved with the production. He even wrote Episode 8 himself so that keeps the faithfulness in the show. This is no “True Blood”-style adaptation for which I am glad.

The only thing is that since I read the book, there wasn’t much suspense in the critical. I have seen numerous adaptations over the years and that isn’t generally an issue, but this was a 10 hour mini series. It was particularly long especially since I felt the middle dragged a bit as in the book.

All in all, I was satisfied with the settings and the casting. I liked most of the casting choices. When I was reading the book, I could see Sean Bean as Ned. Both the acting and the script made the more villainous characters such as the Lannisers more sympathetic. They also sold the Dany/Drogol romance very well and romance does better on screen than in a fantasy book.

The scene that I wanted to see adapted the most was the final scene. They did a good job; I’m really glad Ian Glein is Ser Jorah. While I think Emilia Clarke is wonderful as Dany, Glein is charismatic and very talented that he really brings something to their scenes and their storyline.

I’m tempted to jump straight to season two without reading the book, but I will bide my time. Season three will start March 31st. I will try to put off reading and watching Clash of Kings and Season two until the third season airs, and then follow up with A Storm of Swords after it has finished airing. I rather like marathoning through shows now especially for this one since I already know what happens. If I am not sick of the series after three books, I’ll move onto four and five eventually. In the meantime, other books and adaptations!

Here is the opening credits for Season 1: