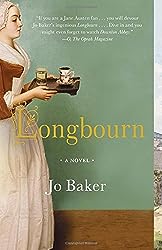 This novel is the retelling of Pride and Prejudice from the servants’ point of view or rather focuses on the lives of the servants.

I picked this book up spontaneously from the library’s Express Books as I often do. Looking for some midweek relaxation, I read it last evening. It wasn’t particularly difficult to read, but I do feel I glossed over some of it.

There are some nice moments and if you’re familiar with the Austen books or the time period, it can be an easy read. I did realize early on that I wouldn’t really love this book. While I felt a bit for Sarah, I wasn’t really engaged with her all the time too.

I found most of the novel on the boring side. To be honest, this is a historical novel that feels like it randomly inserted characters with the same names as the ones in P&P rather than act as a homage to the work. I just didn’t really see the link between this novel and P&P other than it sharing some characters.

What got me most after I finished it was that the tone of the novel was very different than P&P. While Austen does have her dramatic and serious feeling moments, the satire, social commentary, and tongue in cheek nature of some of her characters make the novels light. There wasn’t any lightness to this novel. It felt dour and humourless. The ending was a happy one, but it didn’t make up for how most of the novel was heavy.

Reading the reviews of it afterwards on GoodReads, it polarized people. I can see some positives to it, but I would not call this a true homeage to Austen.