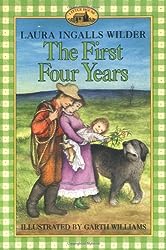 When I first read the reviews of this book earlier in the year, I didn’t think I would read the “final” Little House books. I don’t think I read this book when I was a kid or a teenager. Like Farmer Boy, I had missed out on it. Maybe I did read it and blocked it out because it is quite depressing in parts. Having said that, I think I liked it.

The story is considerably different in tone than the other books in the series. Laura did not work on it much after Almanzo died so it this could be considered an unfinished manuscript. The rawness and honesty in the books makes it interesting though. Laura doesn’t want to be a farmer’s wife which is in character. The young family suffer through so much in the books and there seems to be a lot less happy moments. It is no wonder why the previous/last book is called These Happy Golden Years.

A friend and I discussed how this book makes you wonder more about the marriage of Laura and Manly. There seems to be less good moments between them as they both suffer through bad luck on the farm and not the best financial management. I felt bad for them both. There was a distinct lack of romance in this book.

I am glad to have read this book. It makes one appreciate what one has now and how hard it was back then. I look forward to Pioneer Girl even more now though as I have become attached to Wilder’s writing again.