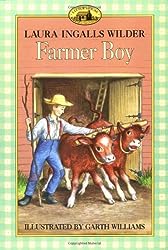 This book in the series is known for its food, and there is lots and lots of food at the beginning stages. Almanzo’s childhood is relatively stable and abundant when compared to Laura’s. I think Laura wrote all the food to emphasize how much Manly had, but also how much she herself didn’t have growing up.

This is actually a really good standalone children’s book. There are a lot of period details about farm life from harvesting, weaving, animal husbandry, the fair, and much more. I only felt bad for the women and girls. Alice, Eliza, and Mother seemed to have been in the kitchen their whole lives. Alice even says “Boys have all the fun.”

The other discomfort would be the outdated stories about the Indian at the fair and playing “Indian”. The other annoying thing was Almanzo randomly getting $200 at the end for no reason really. None of the kids get “tanned” by their parent in this story. In fact, Father Wilder seems to be an incredibly savvy and benevolent man.

I’d reread this in the future. There was some sweet moments, but the ending was a bit abrupt.