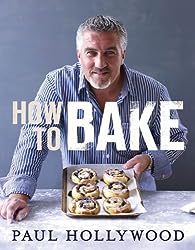 This is the first of three Paul Hollywood books I will review. As someone who loves baking, most of my cookbooks are focused on baking from the sweet to savoury to bread. This book covers that. It is the British edition of the book which I ordered from Book Outlet. I do prefer the UK editions of cookbooks.

What is a bit inconvenient is that Hollywood loves Stilton cheese which I can’t eat due to a penicillin allergy. Époisses cheese is featured once in this book too and it is hard to source here. As a UK book, there other things such as apricot jam, glace cherries, and dried peel. The pies and tarts section is more British as well. I love British baking so I adapt and substitute when necessary.

This book is suitable for novices, but it has recipes and sections for more adventurous bakers. There are sections for Sourdough and Pastries. My relationship with the former is contentious and most of the sourdough recipes makes 2 loaves which is too much for me. There are recipes for croissants, danishes, and brioche. I’ll tackle the brioche one day.

There are couple of non-baking recipes such as those breads or “bakes” you can make on the stove: chapatis, crumpets, and pancakes. On the whole, I’d recommend this for bakers who are keen on breads and expanding their repertoire. It’s not a cookies/biscuits kind of book. None of Hollywood’s books are. They are a bit more advanced than some standard cookbooks.

This was my first Hollywood book and I continue to love his cookbooks from the photographs, instructions, and to the binding.

Prose and Writing: Each section has an introduction page which gives some good pointers. Every recipe has a little blurb which not extremely useful, but nice. Hollywood is not super effusive in his writing.
Technique and Teaching: Lots of information for bakers with a bit of experience. He teaches various bread shapes: plaits, spirals, loaves, couronnes, and so forth. I’ve learned many bread and baking tips from Paul Hollywood including kneading with oil and simple things like how to mix, what tools to use, etc.
Photography and Layout: This book stands out because of the instructional photos. Great photography all around.
Other Book Notes: I really liked the overall binding of this book. It’s a hard cover, but Hollywood’s books tend to be less glossy and lighter.
Usefulness Factor: 5/5. If you’re serious about baking, bread, and viennoiseries, this a useful book.
Inspiration Factor: 4/5. Croissants and Danishes!
Recipes Tested: 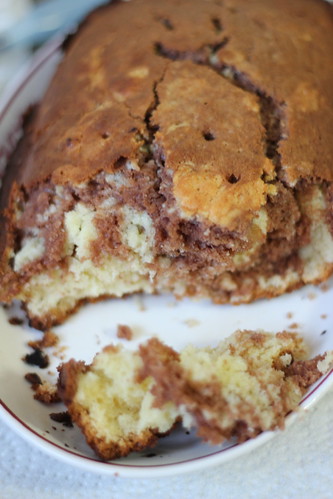 From How to Bake by Paul Hollywood and lovefood

Recipe Review: While still good, this is not one of the best recipes in the book.

A 1kg loaf tin is 2lb loaf tin or by some sources, a 9×5. I have an 8×4 metal tin and a 10×6 silicone loaf mold. I used my 10×6 silicone loaf mold which makes the cake batter more shallow. In Hollywood’s Bread book, he writes that a standard 1kg loaf tin is about 27cm x 13cm x 7.5cm which would make it almost a 10×6. To be safe, I increased the temperature by 25 degrees and decreased the baking time. I checked it around 33 minutes because of the smell. It was not done, but it was done about ten minutes later. I really like using the silicone mold because I don’t have to grease it or use parchment paper, but it throws off the baking time and makes loves lower than they could be. I need to buy a 9×5.

This recipe required a lot of beating which was good for the workout. Sugar was 160g or 15g for the cocoa portion. I found it hard to marble though which is why my loaf ended up looking ugly.

Taste was good and if I kept the sugar at 200g, it would still have been alright since I think Hollywood’s recipes are less sweet than some others. This recipe was for the most part easy and I did enjoy the result. Unlikely to make again, but I still adore this cookbook.

ETA: Four days later and I have to say that I gifted some of the loaf to my parents and as they ate through it, the marbling got better. Taste was still good within the first three days too. I’d make the loaf again actually, but using a hand mixer next time.