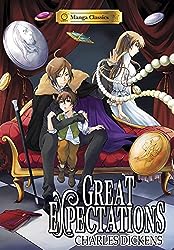 I read this on Free Comic Book Day except I didn’t want to queue for that so I read this manga instead.

Reading this again naturally reminded me of the novel and the many other adaptations I’ve seen. This is such a grim and tragic story. There are a lot of characters in the book who were treated very poorly and dealt bad hands. Pip was also really ignorant of things for most of the book and it was cringe worthy sometimes. This does not translate as well to manga where the humor is lighter and this novel is not light. I am glad that Dickens did change the ending from its original one because this is such a mirthless book.

The manga adaptation itself did a good job with the material and did make it lighter than it was. It did seem to rush through the last few bits though. It had to because even though this is one of Dickens’ shorter novels, it is still a long one.

I would recommend it only to people who like this novel and manga in general.