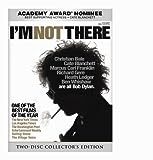 This was very strange and different. I liked it. It was funny, entertaining, well written, directed, and acted. It is true that I am a Dylan fan, and you get a lot more from this by knowing the man’s works and history. I found the awkwardness and the alienation displayed by some of the Dylans very true since I sympathised with that anger displayed in Dylan’s memoirs Chronicles. Cate Blantchett is amazing in this. She is perfectly androgynous, twitchy, funny, in your face, beautiful, etc. I could go on. I love Christian Bale’s storyline too as he has that young political charisma. Julianne Moore as the Joan Baez character is very amusing; I loved them casting David Cross as Allan Ginsberg. This was the first time seeing any Heath Ledger film since it’s death; it made me very sad. He is so talented, and his story with Charlotte Gainsbourg was very true of young love. I thought this movie did a better overall job of showcasing the 60s than Across the Universe did; it felt more personal and detached at the same time. Though I was not born yet, this film’s capturing of the decade works for me. As for the other Dyland story lines, I liked Marcus Carl Franklin. The kid is a good actor and has a nice singing voice. Ben Whishaw was underused. Of all the Dylans, I cared for Richard Gere’s the least. Maybe it was the way he played it. I got the two-disc original soundtrack as well which has lots of covers and Dylan’s “I’m not there”. Good stuff overall. Definitely worth a rewatch or two.