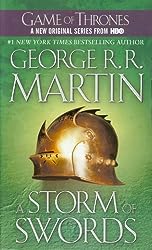 There are spoilers in this review.

From the first book on, I knew there would be characters and plot lines I wouldn’t give a fig for (to be fair, I love figs). It gets worse and worse every book as I become disheartened by characters I previously like: Arya, Jon and Tyrion have become flat for me in and out. Tyrion’s murders of his father and his lover are fitting, but also discomforting.

Even Daenyrs whom I’ve liked from the beginning and one of the only characters I like has become a bit predictable.

Some characters are so far away from each other and you’d wish they would get together, but they rarely do. If they do, it’s not for long. The cliff hanger endings hold no appeal because I know Martin will just change up easily.

On the positive aspects, I do want to know where this series is all leading too. Maybe I am naive that there will be some sort of end game. It is going at a glacial place. I am glad certain people were killed so I don’t have to read about them anymore.

I think my favourite aspect of this whole novel was the journey of Jaime Lannister. He has now shot up to being one of my favourite characters in this series. Martin can change that easily, but his journey from POW to hostage returning home to cripple to being rejected and rejecting his family shows considerable character growth. His frenemy relationship with Brienne is nice as well. I felt so sorry for Jaime at the end who finally has tried to become an honourable man and one of the best of all the Lannisters now.

The last two Song of Fire & Ice reviews did include reviews of the show, but since I know how violent season three will be, I’m holding off until I read book the next book or so. I’m not that eager for the TV show now.

I will continue the book series and hope that I get something as good as Jaime’s journey as I did in this novel.