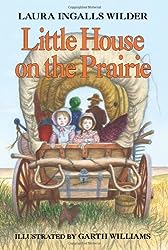 Compared to the first book, lots of things happen in this novel. So also begins the
the restlessness of Charles Ingalls.

This novel had moving, travel, house building, Indians, malaria, and more. A lot of the stuff was on the scary side such as the creek crossing part, almost losing Jack the dog, and basically all the parts with wild animals.

It was a bit interesting to watch them travel and build a home on the prairies. Pa also seems to be a great hunter. I do like his endearment to Laura being “half-pint of sweet cider half drunk up.” I also liked the introduction of Mr. Edwards; I liked him when I was a kid too. I enjoyed the Santa Claus chapter and laughed out loud with that line: “In the Southwest, Santa Claus rides a pack mule”

The Scotts’ racism against Indians was a low point though. Pa wasn’t particularly prejudiced, but I’m wary about this whole land issue in the book.

I can’t judge this book without reading the others I feel. There are some nice moments that exemplified Laura’s (or Rose’s) writing ability.