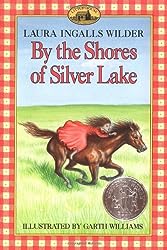 Two years pass between this book and the last one. Almost immediately we are told that Mary has become blind and Ma had has another baby so now there are four girls. They experience their first train ride, hotel experience, and moving to Dakota Territory to become homesteaders.

There was a lot of singing in this book. A bit too much for me. I really enjoyed Laura’s adventures in the wild and Laura is so relateable. Opposed to Mary. She was Ok in the beginning (“you create pictures with your words, Laura”) then got annoying: “I really don’t know, Laura, why you’d rather those rough men… I’ve finished another quilt patch while you’ve been idling.” Carrie seems to be afraid of everything.

I do feel sorry for Laura. She is growing up and has to be the eldest all of a sudden. Pa tells Laura that Ma wants one of the girls to teach and it has to be her. Sigh.

They talk about how they wouldn’t have been scalped back in Indian Territory except for one and Caroline argues back. It doesn’t make sense though; it’s just prejudice. I mean they were in Indian territory! What did they expect? Her issue was with them moving to Indian territory and that was Pa’s decision.

On a final note, I like the side characters as usual: Big Jerry and the Boasts: “Mr Boast’s laugh tickles,” Carrie said.

Laura’s writing continues to be lovely in parts. I had forgotten how excellent a writer she is (or Rose, it’s hard to tell). It gives me more mixed feelings about the books. Sigh.