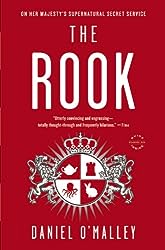 This book had all the ingredients to me liking it when I heard about it: Set in the UK. Spies. Supernaturals. Female Protagonist.

Before I gush a bit, I will say what I didn’t love about it. These are minor quibbles, but I’ll get it out of the way. First, the protagonist Myfanwy and most of the major characters are British. Myfanwy doesn’t even travel or seem to even have much of a life outside of work, but there was something not British or English enough about the novel. Around the halfway mark, I read that the author is American/Australian. That explained it. Not to say the British deadpan and dry humor isn’t in the novel. It is, but the characters just did not seem English enough for me. That is a bit mad of me since I am not British.

The second very minor quibble was that I grew tired of reading the italicized chapters after awhile. It served a great purpose, but italic text for more than two pages is annoying to read.

Now for the good bits. This novel has a cracking premise. It has a mystery, a credible strong yet flawed female protagonist, and great world building. This is an adult novel and while there is no overt sexuality (in fact, there isn’t even a romance), there is violence, but it’s not violent for the sake of it. The nature of the supernatural spy agency means the stakes are higher. Certain characters were very creepy though. I cringed once toward the ending when there was the reveal about a certain baby. I had suspected it pages earlier, but it was still disgusting to learn with Myfanwy.

As mentioned earlier, this novel is rare that there was no real strong presence of romance or the possible leading man for her. There was a very faint hint of one, but it’s barely there. Unusual and rather interesting. I hope O’Malley can write a romance as well as he seems to be doing with the female friendships in this novel. I really enjoyed Myfanwy’s relationships with Bronwyn, Shantay, Lady Farrier, Val, and Ingrid.

Some people would find the novel long, but I liked the length. I really felt immersed in the world. With the dialogue and the fast pace, I had no trouble reading it. It’s been a long time since I read a novel this quickly which is a testament to how much I enjoyed it. I’m glad I put this off for several months because I’ll only have to wait until the summer for the sequel.