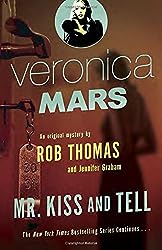 Another nice installment in the Veronica Mars series. I don’t think I’ve had the experience of watching a TV show, a followup movie, and then its continued book series. It’s a nice journey and good to revisit some characters that I really know. It also allows for a lot of growth and character development.

The mystery kept me interested, but it was really the larger universe and cast of characters that pleased me. The universe of the show has expanded and travelled so much. I find it amusing because I am the exact same age as Veronica and her cohorts, but I’m not really like her. I do like her more than I did when I watched the show though. She is more prickly and less accepting of change though. Her relationships are great and I do enjoy how grey her world is. As a PI, she did have to employ a more seedy way of getting the perpetrator of the book in the end. She did not sacrifice her integrity too much. I’ve appreciated the nuances and the ambiguity of being the universe.

I can hear the voices of the actors when I read the book. I do think it’s harder with Logan because Jason Dohring’s acting choices as Logan were always harder to predict. Secondly, this Logan is very different from the Logan of the original show. He’s grown a lot and the character is explored more in this book.

These books are light even if the mysteries are not. They are definitely enjoyable for me as someone who liked the show and the movie. I hope this book series lasts a long time.