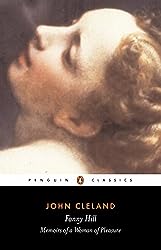 Memoirs of a Woman of Pleasure or Fanny Hill by John Cleland is considered the first pornography in novel form. This book was widely banned, illegally published, and denounced by its author. It is definitely a classic in an infamous way at least. But is it a good novel?

Not all of the sex in this book was consensual, the first encounter was of dubious consent as Fanny doesn’t even know what’s going on. She was almost raped early on, she was roofied, and she witnessed at least one rape. These parts are rather unpleasant to read because they do take of the side of being written from a man of privilege. Never forget that 20 something man wrote from the sexual perspective of a teenage girl.

The sex scenes are not that bad. There is a bit too much description of “machines” and other phallic metaphors. I’ve read much worse, but I have read better too. I found that none of the sex scenes were memorable. After I put the book down, I only had a vague memory of them. After about two thirds into the novel, I found myself bored with most of the sex scenes including the one between two men.

I do wonder if Cleland was a bisexual. I think this book strongly implies he was at least bisexual because this book had one of the first published homoerotic scenes in English literature. Secondly, the heavy emphasis on phalluses at times does make you think he liked men.

From another gender perspective, none of the women are shamed and the fact that most of them seem to enjoy a sex positive life as prostitutes is actually a bit more advanced for its time. It does not make Cleland a feminist though considering all the consent issues in the book.

The ending is pure bodice ripper happily-ever-after. It’s rather cute actually and probably pushed me to give this book a high 2.5 stars rounding up to a 3 for GoodReads.