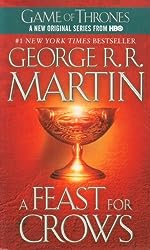 I enjoyed this read as I have most of the Song of Fire & Ice series, but I did miss knowing what was going on outside of Westeros.

Having said that, this book started more slowly than the other novels. I did like how female dominated it was. As Cersei, Arya, Sansa, Brienne, and other female characters stories were told. It did make me miss Danerys though. At least there was Jaime who has become one of my favourite characters.

The ending was less cliffhanger-y than the previous books probably because the other half of the book is in Book Five.

In other news, I’m rather proud that I read this in one day. I’ve definitely gotten back into my reading groove with all these good books in the new year.